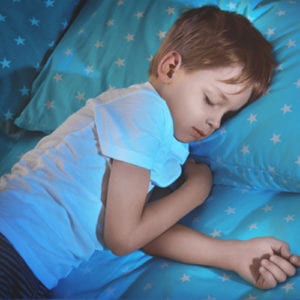 Sleep apnea has become an epidemic among not only adults but children too. Used to, sleep apnea was associated with middle-aged men that were overweight. But, even children as young as two years of age can develop this sleep breathing disorder.

The surprising fact is that parents can help prevent this devastating sleep breathing disorder, known as the silent killer. Fist, you must be aware of the symptoms and know when to take action.

What is sleep apnea?

Sleep apnea occurs when the airway becomes restricted from proper airflow while sleeping. In other words, the body is being starved of oxygen, and it is unable to rest and rejuvenate, a necessary part of a child’s growth and development.

If you are concerned whether your child has sleep apnea, pay attention to these symptoms. Snoring is the number one indicator of a sleep breathing disorder. Even one instance of pediatric snoring should be a concern to the parent or guardian. Mouth breathing is another telltale sign that your child is not receiving the proper amounts of oxygen that their body needs to thrive. Poor performance in school or sports is often an indicator that a child is not resting well, which could be a result of obstructive sleep apnea. Children are often treated for behavioral problems such as ADD/ADHD when in fact the cause of their behavior is inadequate sleep because of sleep apnea. In fact, research indicates that nearly 25% of children being treated with attention deficit disorders are actually misdiagnosed, and likely have sleep apnea, which is contributing to their behavioral changes.

Sleep apnea is commonly overlooked among primary care physicians. Instead, they may treat a child’s behavioral issue with medication. Although these medications may curb hyperactivity symptoms in a child, the cause of the problem still exists – sleep apnea. Why continue medicating your child with ADD/ADHD medication when what they really need is air? In these instances, not only is the child being over medicated for a disorder he or she does not really have, but also their sleep apnea is left untreated, which can have devastating health consequences.

Untreated sleep apnea puts a strain on the heart, leading to an increased risk of heart disease, stroke, diabetes, and affects oral health. It often results in mouth breathing either at night or during the day also. Mouth breathing dries out the mouth, creating the perfect environment for bacteria to cause tooth decay. Sleep apnea has become labeled as the “silent killer” because of its link to comorbidities (the presence of two chronic illnesses), and even death. Your child’s life could be on the line if they are living with untreated sleep apnea.

If your child exhibits any of the symptoms mentioned above that are associated with sleep apnea, consider an airway evaluation by Ebrahimian Integrative Dentistry. Contact us at (831) 438-4411 to schedule an evaluation today.