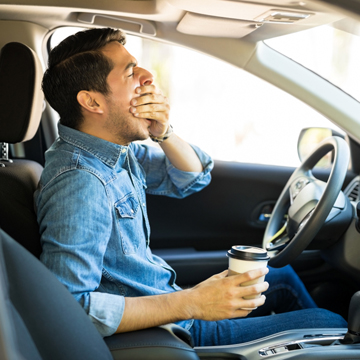 Driving a vehicle doesn’t come without its own set of risks. But, those risks are higher when a driver speeds, drives under the influence of alcohol, or drives while sleepy. In 2015, nearly 5,000 people died in vehicular crashes caused by tired or drowsy drivers, according to the Governors Highway Safety Administration. While you probably are aware that driving drowsy isn’t just a result of not getting enough sleep. It can be caused by untreated sleep apnea.

Drs. Max Ebrahimian and Arianna Ebrahimian, dentists that offer sleep apnea screenings in Scotts Valley, Los Gatos, and Santa Cruz, want you to know the dangers of driving while drowsy, what could be the cause, and what you can do about it.

Driving while sleepy can have deadly consequences

The National Highway Safety Traffic Administration reports that 795 lives were claimed in 2017 from car wrecks where drowsy driving or falling asleep at the wheel were a factor. The risk of getting killed in a car wreck as a result of a tired driver increases if you are on the roads between the hours of midnight and 6 a.m. And these type of crashes is more likely to occur while driving on either rural roads or highways.

An apparent cause of drowsy driving is not getting enough sleep or sleep deprivation. Other reasons may be from jet lag, working late night or overnight shifts, or a side effect of certain medications. But, there is one less-known cause – untreated obstructive sleep apnea. The problem with sleep apnea is that many sufferers aren’t even aware that they have it. You might go to bed at a decent hour every night, and wake up at the same time every day clocking plenty of hours of shut-eye. But, if you aren’t sleeping well during that time, then it’s just as bad as only having gotten a few hours of restful sleep.

What is obstructed sleep apnea?

Also referred to as OSA, sleep apnea is when the airway collapses or is restricted to the point that it blocks airflow. This can be detrimental to one’s health in a variety of ways, even increasing the risk of heart disease, stroke, and certain types of cancer. The airway obstruction may be caused by anatomical factors, like enlarged tonsils or adenoids, or from the tongue resting too far back in the mouth. The problem is that when the airway is blocked, the body isn’t getting enough air. The brain reacts by waking up out of the deepest stage of sleep, known as R.E.M. sleep, which is a necessary stage of the sleep cycle needed to feel restful and allow the mind to rejuvenate.

How to tell if you have sleep apnea

The problem with sleep apnea is that many people are unaware that they even have it, and it’s more common than you may realize. There are more than 18 million Americans that suffer from untreated OSA, according to the National Sleep Foundation. It can affect men and women of all ages, even young children. The biggest warning signs to watch for in adults include snoring, daytime fatigue, mood swings, difficulty concentrating, and memory loss or forgetfulness. If you exhibit any symptoms associated with OSA, ask your Scotts Valley dentists for a sleep apnea screening today.

Sleep apnea treatment doesn’t have to involve using an annoying CPAP machine. Instead, we can successfully treat our patients with OSA by designing a custom-made oral appliance that holds the lower jaw slightly forward, enough to allow for proper airflow. This method of treatment works well for mild cases of sleep apnea.

To learn more, or schedule a sleep apnea screening, just contact Ebrahimian Integrative Dentistry by calling (831) 438-4411 to schedule a consultation.

Ebrahimian Integrative Dentistry is here to serve the oral health needs of patients in the areas of Los Gatos, Santa Cruz, and Scotts Valley in California.