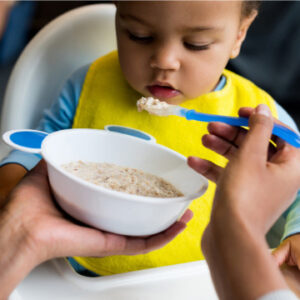 For decades, advertisements and doctors have encouraged new parents to incorporate mushy rice cereal and food from a pouch into their baby’s diet between 4 to 6 months of age. It’s around this age that babies develop the ability to swallow solid food, and experts believe that parents should introduce cereal or mushy food to their babies first. Adding solid food to a baby’s diet helps ensure they receive enough vitamins and nutrients and helps babies sleep better through the night because they will stay fuller for longer. (What parent doesn’t wish for a full night’s sleep without disruption?) However, mounting evidence shows that starting a baby on a mushy diet and prolonging the introduction of actual solid food may significantly impact their facial growth. In the end, we see more children dealing with overcrowded teeth, narrow dental arches, and airways, orofacial myofunctional disorders, and even sleep apnea. Today on the blog, myofunctional therapists in Scotts Valley at Ebrahimian Integrative Dentistry explore this phenomenon and explain how to combat this issue for your own children.

Look at the supermarket shelves in the baby food aisle at any store, and you will see a plethora of jarred baby food, boxed rice cereal, and pouched food products. In recent years, these products have multiped and now offer more options than ever before. Not only are these food items convenient for parents (because you can toss these items in the diaper bag for on-the-go meals), but babies and toddlers tend to prefer mushy food over options that require more effort to chew. Unfortunately, these pouch baby foods often have a high amount of added sugar, which primes your baby’s pallet to prefer sweeter tasting foods. Additionally, mushy food creates smaller jawbone development and narrow airways. While convenience is sometimes a necessity, parents shouldn’t rely upon it all of the time.

These days, it seems as though getting braces is a rite of passage for many children and young teens. Overbites, underbites, severely crooked or crowded teeth usually are addressed with orthodontics. But what if you could lessen the chance of needing or altogether avoid braces for your child later on? First, we want to say that straightening teeth shouldn’t solely be about aesthetics. A lot more is going on with a patient’s underlying bone structure that is to blame for the aesthetic problem that you can see with your own eyes. Narrow upper dental arches and underdeveloped lower jaws often contribute to these aesthetic concerns of crooked or overlapping teeth. However, one key component to reducing the chance that your child will have these issues later is introducing solid food as early as possible.

Let’s look at the proof

In 1894, a Canadian dentist, Weston Price, became interested in studying jaw development. In his research, he visited various areas of the world like Switzerland, Australia, and Polynesia. By analyzing more than 15,000 photographs and 5,000 slides, he published his book Nutrition and Physical Degeneration in 1934. Interestingly, Dr. Price found that the “westernized” diet of soft, mushy food resulted in more people with crowded or underdeveloped jaws. Whereas in parts of the world where people ate more wholesome, homecooked meals, they had straighter teeth and better-developed jaws.

How much we chew and what we chew makes a significant difference in our jaw development, as well as how teeth align when they erupt. Another researcher, Daniel Lieberman, published in his book, The Story of the Human Body, that skulls analyzed from the past few hundred years showed many farmers in the western part of the world had rampant tooth decay and even abscesses. Their jaws were narrow and underdeveloped, which resulted in crowded or impacted teeth. However, comparing these findings to skulls of hunter-gathers, these individuals were found to have nearly perfect dental health.

What does this mean for babies?

What all of this means for your baby is that the sooner they begin eating real food, the healthier and better developed their jaws will be later in life. The baby food industry is vast and profitable, but it didn’t always exist. Have you ever wondered what babies ate hundreds or thousands of years ago? Not baby food! Because it didn’t exist. Babies tend to start reaching for things, including food, around six months of age. Baby-led weaning is one way to ensure your child gets the nutrition they need while also developing strong, healthy jaws. Allow your child to eat what you cook for your family, although you should be sure to cut large chunks of food to prevent choking. Baby-led weaning is a movement that allows the child to feed themselves from the start of the weaning process. The sooner your child starts eating real chewable food, the better chance they will have at developing their jaws to the fullest potential.

There are other factors that play a significant role in a child’s jaw growth and development. Chronic allergies, prolonged thumb sucking, and mouth breathing also affect jaw growth. These are orofacial myofunctional disorders that can be caught early if your child sees a dentist in Scotts Valley that offers myofunctional therapy for kids. Early intervention can be less invasive and less costly compared to braces later on. Plus, you’ll save your child from having to deal with the aesthetic ramifications of an underdeveloped jaw and crowded teeth.

Ebrahimian Integrative Dentistry is a dental office in Scotts Valley that accepts patients of all ages. We focus on holistic treatment that incorporates traditional dental care with the philosophy of achieving harmony and balance of the jaw, occlusion (bite), optimal airway, and oral rest posture, which begins at birth. Learn more or schedule a consultation today by calling (831) 438-4411. We would also love to speak with you about how best to prepare healthy foods for your family, suitable and safe for your baby to enjoy.