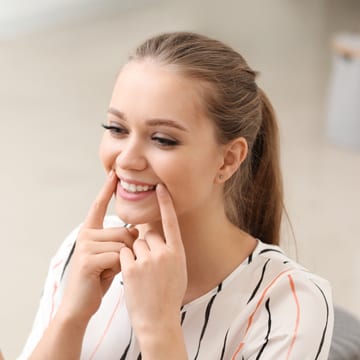 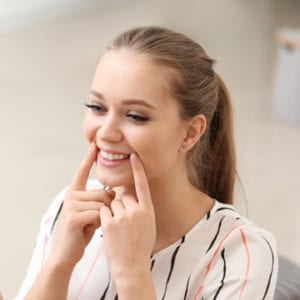 Ebrahimian Integrative Dentistry prides itself on being the only dental office on the central coast of California whose team includes a certified myofunctional therapist and Buteyko breathing educator. Jean Shimizu, one of our dental hygienists, specializes in both of these therapies.

What is myofunctional therapy?

In short, myofunctional therapy is a series of painless and simple exercises to work the musculature of the mouth and face, as well as the tongue. When overseen by a qualified myofunctional therapist in Scotts Valley like Jean Shimizu, this method succeeds in correcting the function of the tongue and facial muscles both when at rest and when swallowing. If a person swallows improperly, this can cause a variety of health problems, especially when you consider that the average individual swallows as many as 600 to 1,000 times every day. The improper resting position of the mouth and tongue can also result in mouth breathing, which poses serious health consequences. The resting position of the tongue and a correct swallowing pattern are both vital to overall oral health.

Myofunctional therapy and Buteyko breathing are both key treatment options for mouth breathing.

Why is mouth breathing bad for my health?

In addition to being a less efficient way for the body to absorb oxygen, mouth breathing can worsen certain pre-existing medical conditions such as sinusitis, certain skin diseases, GI problems, or malignant tumors. Recently, the findings of pediatric research indicate that children who breathe regularly through the mouth are more likely to develop malocclusion (bad bite).

Mouth breathing while asleep can be a precursor to the development of a sleep breathing disorder which disrupts rest and causes fatigue, irritability, and lack of focus. Sleep apnea is a common sleep-breathing disorder affecting many Americans, even children. Sleep apnea also increases a person’s risk of developing major health issues like heart disease, stroke, or high blood pressure.

In children, sleep-breathing disorders can be a precursor to childhood obesity, and present symptoms of ADHD.

Myofunctional therapy encourages the widening of the airway and fosters the ability to breathe through the nose rather than the mouth. It does so by helping a patient achieve or regain the ideal oral resting posture. This means that, when you are not eating or speaking, your orofacial system is at rest as follows: with lips closed, teeth closed, and tongue resting gently against the upper palate.

The Buteyko Breathing Method is a holistic, pharmaceutical-free way of eliminating the harmful effects of over-breathing. Asthma, anxiety, poor sleep, irritable bowel, and shortness of breath are just a few of the many symptoms of over-breathing. Great for children and adults alike, Buteyko Breathing Method not only can alleviate these problems but also can improve athletic performance. Buteyko consists of having the mouth taped during sleep; a small amount of Vaseline or 3M cream is applied to the skin, and a small strip of tape is placed vertically across the middle of the mouth. This encourages nasal breathing, which consists of taking slower, shallower breaths, giving your body more time to absorb oxygen. This air also has a higher quantity of nitric oxide, which kills bacteria while also fostering dilation of your airway, arteries, and capillaries.

Remember that any mouth taping should be considered only as a temporary measure. Ready to find out more about myofunctional therapy or Buteyko breathing? Then contact the Ebrahimian Integrative Dentistry office in Scotts Valley, CA, at (831) 824-5111 to schedule an appointment.

This review is a long time coming. In March 2018 I visited Dr. Max's for an evaluation for the Anterior Growth Guidance Appliance/Controlled Arch. At the...

My son had been diagnosed as having sleep apnea by PSG (overnight sleep study in clinic). He had been a mouth breather since he was a toddler, and his...